Copernicus is the European Union’s Earth observation programme coordinated and managed by the European Commission in partnership with the European Space Agency (ESA), the EU Member States and EU Agencies. ESA is currently developing seven missions under the Sentinel programme. The Sentinel missions include radar and super-spectral imaging for land, ocean and atmospheric monitoring. Each Sentinel mission is based on a constellation of two satellites to fulfill and revisit the coverage requirements for each mission, providing robust datasets for all Copernicus services. Data from the Copernicus Sentinels feed into the Copernicus Services, which help address challenges such as urbanisation, food security, rising sea levels, diminishing polar ice, natural disasters and, of course, climate change.

In preparation for the second-generation of Copernicus (Copernicus2.0), six High Priority Candidate “expansion” missions are currently being studied by ESA to address EU Policy and gaps in Copernicus user needs, and to increase the current capabilities of the Copernicus Space Component. Among the six potential missions, CRISTAL possesses strong arguments to be selected and operate in the futur Copernicus constellation.

The primary objectives of the CRISTAL mission are:

1. To measure and monitor the variability of Arctic and Southern Ocean sea-ice thickness and its snow depth. Seasonal sea ice cycles are important for both human activities and biological habitats. The inter-annual variability of sea ice is a sensitive climate indicator; it is also essential for long term planning of any kind of activity in the polar regions. Knowledge of snow depth will lead to improved accuracy in measurements of sea ice thickness and is required for improving forecast models. On shorter timescales, measurements of sea ice thickness and information about Arctic Ocean sea state are essential to support maritime operations in ice-covered waters.

2. To measure and monitor the surface elevation and changes therein of glaciers, ice caps and the Antarctic and Greenland ice sheets. The two ice sheets of Antarctica and Greenland store the majority of Earth’s fresh water and continued observations are important for understanding their contributions to sea level and climate change. Monitoring grounding line migration and elevation changes of floating and grounded ice sheet margins is important to identify and track emerging instabilities, which can negatively impact the stability of the ice sheets and result in future sea level rise.

a) to contribute to the observation of global ocean topography as a continuum up to the poles.
b) to support applications related to coastal and inland waters. Observation of water level at the (Arctic) coast as well as of rivers and lakes is a key quantity in hydrological research.
c) to support applications related to high latitude snow cover and permafrost.

The primary topography payload envisaged for this mission comprises an Interferometric Radar altimeter for Ice and Snow (IRIS) and a microwave radiometer (MWR). The CRISTAL Altimeter (IRIS) is based on Poseidon-4 (Sentinel-6) and SIRAL (CryoSat-2) together with the addition of a Ka-band channel (analogous to AltiKa) and a bandwidth of 500MHz to meet the improved range resolution requirement in comparison to heritage altimeters. It has the capability for delay Doppler processing to  reduce the along-track footprint (SAR unfocused mode, Fully-Focused SAR). The two antennas will also enable the SAR Interferometric mode, in the same fashion as CryoSat-2. 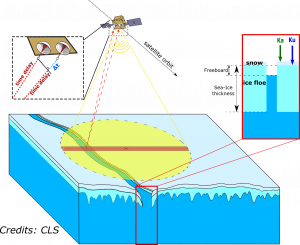