Since the inception of radar altimetry, 25 years ago, CLS developed and continuously improved several numerical simulation tools to understand and study the altimetry measure. In this study, we use “AltiDop”, a versatile simulator, with an end-to-end capability: from scene generation to level-2 retracking. It has the capability to simulate altimetry waveforms in multiple ways:

The waveforms are simulated through a numerical pixelized-scene. Each pixel representing a facet, a portion of the scene, for which the altimetry signal backscattered is computed using the radar equation (see equation 8). The signal therefore depends on:

The simulator is mainly used for oceanic studies, and it is possible to generate scenes with facets elevations and slopes reproducing realistic sea states: windsea and swell conditions notably.

A numerical scene is generated, corresponding to a 2D data matrix, with each matrix element representing a surface facet. Facets elevation can be computed in several ways: 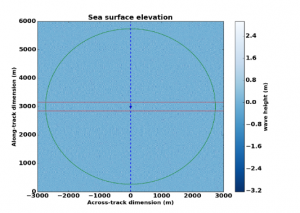 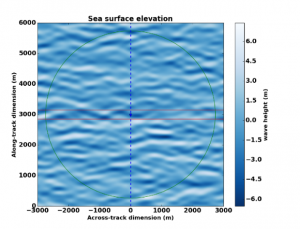 The altimetry signal backscattered by each facet is computed using the radar equation, formulated by Brown [1977]:

The altimeter range is computed for every facet given the antenna/facet distance. Thanks to this range distance the contribution of each facet is added at the correct altimeter waveform sample (or range gate). Waveforms can also be oversampled in the range dimension, allowing a numerical convolution with a realistic Pulse Target Response (PTR) with a sinus cardinal shape. The oversampling factor is set by the user.

The Figure below illustrates the final step of the AltiDop simulation, when the LRM power waveform (or the complex pulses) are constructed: